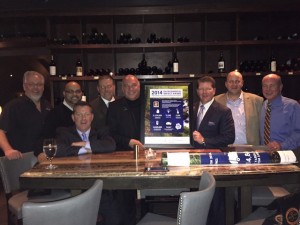 Pratt Industries has honored leading food company Pizza Patrón as one of its most environmentally-friendly customers.

Pratt’s team, led by South West Division President Mike Tansey, presented executives from Pizza Patrón with an Environmental Impact Award for using 100% recycled content packaging in delivering some of the best pizza on the market.

“Pizza Patrón is not only one of our best customers, but also one that shares Pratt Industries’ long-time commitment to the environment,” said Tansey. “They are worthy recipients of this environmental impact award for both a fantastic local performance and for the overall impact they have had on the environment.”

“As a franchisor, we understand how important stewardship of the environment is,” said Andrew Gamm, Pizza Patrón’s executive VP. “Pratt’s recognition of our accomplishments will inspire us to do even more in the future.”

Pizza Patrón is the leading Mexican pizza brand in the U.S. Since its inception almost 30 years ago it has grown to include dozens of franchises in several states.